Party All Night with SF1 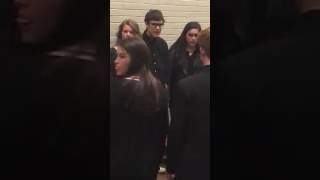 Denver to Experience the Impossible

Haley Bonar on Impossible Dream Tour Larimer Lounge, 11/ 30 7pm Photo by Graham Tolbert Mile High Feedback Exclusive: Singer songwriter Haley Bonar is to return to Denver with a new album, Impossible Dream, and an opportunity to offer new and old fans alike an amazingly intimate experience at Larimer Lounge. Mile High Feedback had the opportunity to interview the delightful Bonar before her performance this Wednesday and get to know her on a bit of a different level. A now v

SLUGGER, Album Review Sad13, also known as Sadie Dupuis, is a pop star that isn't just frills and lace (though she wears those, too!). Not afraid to take a stand in forced societal roles in relationships, she is a new voice and a fresh take on what it actually means to be a strong female in a pop world. Better known for her front-woman position in Speedy Ortiz, Sadie has traded her place in the alt-rock world for a more feminine, yet equally badass, touch. She proclaims

After releasing her 7th studio album, Haley Bonar is out on the road touring the new music. Mile High Feedback will have an opportunity to sit with Haley before her performance at Larimer Lounge on November 30th. Be sure to check back for the interview AND we expect to see you there, too!

Mile High Feedback has been under construction and we are thrilled to announce we are back, refreshed, and better than ever! Learn more about our new Chief Editor, Alan Sperry We are thrilled here at Mile High Feedback to introduce our new Chief Editor, Alan Sperry! He has been affiliated with MHF for a few years, starting as photographer and reviewer of the up and coming media source. He began his journey in Iowa, knowing he wanted to document the weekend and events with his

Hairball: We Salute You!